Happy Families is a card game traditionally, played in the UK, with special packs of 44 picture cards, grouped into 11 sets of 4. The cards feature pictures of family members or job types, for example: Bun the Baker.

Jaques’ version of Happy Families remained popular until the Second World War, but was lucky to survive thereafter. In 1941, during the Blitz, a large bomb destroyed the Hatton Garden factory. However, a safe, which had been kept at the top of the building and had fallen through to the basement, yielded the charred remains of an old pattern book, which included the originals for all the firm’s card games and one example of the Happy Families card game – Master Potts the Painter’s son. Later the printing plates for the game were discovered intact and so Happy Families lived on.

There are no reviews yet. 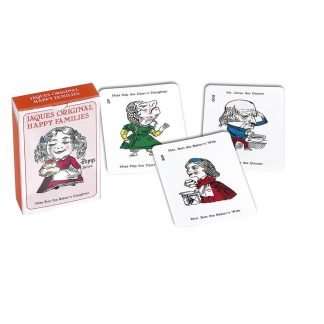 Be first to know

about new product, designs and offers. Fill in your details and we’ll keep you in the know

We promise to email only useful information